Our experts will reply you very soon. 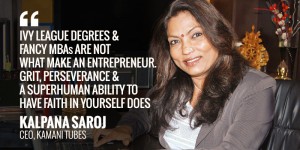 Born into a poor Dalit household, Kalpana Saroj was the eldest daughter of a Maharashtra Police constable in Akola. She lived in a small chawl for Dalits, the lowest Hindu caste that is considered to be untouchable, with her parents and 5 siblings in Akola. Under family pressure, her father was forced to marry off Kalpana at the age of 12 to a man who was 10 years older than her. Kalpana Saroj’s husband took her to Mumbai where they lived in a slum with his family. As the youngest in the household and an outsider, she was forced to work at home. Her husband’s family would physically and mentally abuse her at every opportunity.

Six months after her marriage, Kalpana Saroj’s father visited Mumbai and was shocked to find his daughter emaciated and living in a slum. Against his family’s wishes, Kalpana’s father took her back to their home in Akola.

Being a Dalit and married girl who had left her husband’s home,Kalpana faced social ostracism every day. She had to even give up going to school after Class IX. People would “shame her” for having brought dishonour to the family name. Depressed, Kalpana Saroj tried to end her misery by consuming poison.

Fortunately, Kalpana’s aunt spotted her on time and rushed her to the hospital, where she spent several days in the ICU.Following this incident, Kalpana has never looked back and she never let her determination and perseverance be affected by social and gender constraints. She started work as tailor in Akola and earned Rs 2 for her work. She then convinced her father to let her return to Bombay, the place where she was first tormented, to earn a better living so that she could support the family.

In Mumbai, Kalpana worked as a seamstress in a sweatshop and made a paltry Rs 5 for her work. However, this did not let her ambitions die. As her father lost his job, Kalpana asked her parents and siblings to come to Bombay and live with her in a small rented apartment for just Rs 40.

As the family began a new life in Mumbai, her sister died of a curable illness as the family could not afford the treatment. This is when Kalpana realised that money was important decided she needed to make enough to take care of her family. Running from pillar to post through bureaucratic corridors of India’s financial capital, Kalpana took a government loan to set up a workshop that made first copies of high-end furniture. She worked 16 hours a day to ensure she could save money and reinvested it into buying a property that was stuck in legal quagmire.

Her dogged determination, helped her win the case and then she ventured head on into dangerous world of real estate in, what was then renamed as, Mumbai.

Not giving into threats from the underworld, Kalpana made some money in real estate. Then she saw her opportunity, when the debt-ridden Kamani Pipes was about to be liquidated. She took over as chairman and through restructuring turned the company’s fortunes around. Kamani pipes is worth over $100 million.

She has been awarded the Padma Shri. Her personal mantra, according to an article on yourstory.com, is: Hard work is not overrated. It is fail proof. What you want- whatever it is- you shall get if you apply yourself wholeheartedly and work towards it with a single-minded vision.

Kalpana Saroj has shattered the social and gender glass ceilings as a woman and an entrepreneur.

Kalpana Saroj is a shining example of an authentic leader.

This entry was posted on February, 17, 2017 at 12 : 38 pm and is filed under People Inspires. You can follow any responses to this entry through the RSS 2.0 feed. You can leave a response from your own site.